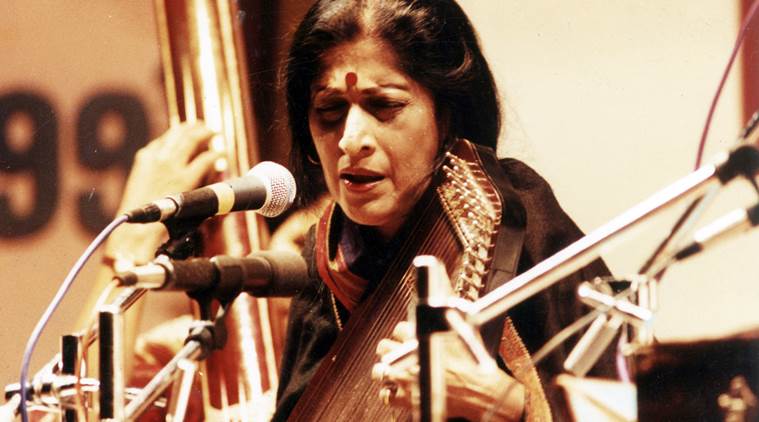 This article was written for a Saptak Archives production, published as a tribute to Vidushi Kishori Amonkar after her passing in 2017. The publication included clips from archival recordings from Kishoritai’s concerts in Ahmedabad, as well as a brief biographical sketch, both of which are presented below

When Vidushi Kishori Amonkar, known fondly as Kishoritai, was born on April 10th, 1932, she would have arrived with the music of Ustad Alladiya Khansaheb already ringing in her ears. Her mother, Gaan Tapasvini Mogubai Kurdikar was learning from Khansaheb at the time, and would spend her nights and days practising and polishing what she had learnt. Even as a child, Kishoritai possessed an uncanny musical ability, together with a naturally brilliant, sweet voice that could induce any ordinary listener to prophesy that she was going to turn out to become a very great singer one day. After an intense career spanning over six decades, she leaves behind legions of followers as one of the most influential female Hindustani vocalists to emerge in independent India.

When, as a sensitive ten year old, her first music teacher doubted her ability to manoeuvre her voice, the rebuke prompted Kishoritai to begin working diligently on it under the guidance of her mother, who took over lessons. An exacting Guru, Mogubai began training her daughter in Ustad Alladiya Khansaheb’s Jaipur-Atrauli discipline. The path of the Jaipur Gharana, as the venerable Khansaheb imagined it, is a precarious tightrope walk along the border separating melody and rhythm. Without falling over on either side, it attempts to erect grand, complex tonal pictures, sculpted with dignity and poise. It was in this demanding discipline that Mogubai groomed her prodigal daughter – transmitting to her Khansaheb’s vision, peppered with her own mature  aesthetic, but always encouraging her to find her own gait, her own way of moving within the framework of the tradition. Kishoritai soon began traveling with her mother for performances, accompanying her on the tanpura, her promise already eliciting praise from admirers. She was also often witness to the unfair treatment meted out to performers, especially women performers in those times. The sting of these injustices, her mother’s encouragement to find her own identity and the realisation of her own talent would all play major roles in shaping Kishoritai’s personality as we know it today.

Magnanimously, Mogubai also ensured that her daughter learnt from various other gurus at various times. Ustad Anwar Hussein Khansaheb of the Agra Gharana is said to have taught her only the famous bandish ‘Mahadev’ in Bahaduri Todi for three months, but all the while insisting that she sing it in her own voice, doing justice to her own temperament, instead of mimicking the vocalism of Agra. The venerable Anjanibai Malpekar of the Bhindibazaar Gharana said to her “In you, your mother has given birth to a real gem”. Kishoritai credits Anjanibai with teaching her her famed meend-kaam. She also had short stints with Mohanrao Palekar, Sharadchandra Arolkar and Balkrishnabuwa Parwatkar, all of whom helped her arrive at her own understanding of the Hindustani tradition.

Her struggle to create a distinct identity for herself hit its major roadblock when she famously lost her voice and couldn’t sing for a long time. All treatments failed, until Sardeshmukh Maharaj of Pune helped her regain it over a period of two years. In retrospect, this long period of silence was essential as a period of introspection and questioning. As Kishoritai has often said later, it was during this period that she began to discover what music really meant to her – to find her own place in the tradition.

Growing up in the Bombay of the 40s and 50s, Kishoritai developed a special affection for the music of the cinema which was reaching its golden age in that era. Other ‘light’ forms of music, such as thumri, ghazal and bhajan all also found audiences in post-independence cosmopolitan Bombay. The unhindered access these forms had to their listeners’ sentiment, their ability to actively elicit strong emotional responses through their many beautiful voices – these were in stark contrast to the disciplined austerity of the classical music of the day, especially to that of the Jaipur Gharana. Kishoritai tried her hand at playback singing for the film Geet Gaya Pattharon Ne in 1964. While her first foray into the genre was electrifying enough to send shivers of nervousness down the spines of many established singers of the time, distressing experiences with the film industry caused her to move away from that genre altogether. But her love for its deep emotional appeal remained. This, and a natural inclination towards the emotional and the devotional would go on to play a major role in shaping her own musical identity.

Kishoritai’s training, her influences, experiences and natural inclinations all really culminated into a distinct new approach to music making in the late 1960’s. Her music became such a radical departure from the Jaipur Gharana of the time, that it caused a rapid growth in her fame and she gradually came to occupy an exalted position among the vocalists of the country.

The 1970s was when the movement of what is known as romanticism in Hindustani music really set in. With its seeds sown in the early 20th century by the likes of Pt. Omkarnath Thakur, romanticism was brought to the fore in the 70s, separately and in very different ways by Pt. Kumar Gandharva and Pt. Jasraj, together with Kishoritai. Romanticism in Indian classical music is defined as as a refusal to let the purely structural demands of music overpower its ability to evoke emotional response – as opposed to classicism which sees beauty in balance, structure and discipline alone.

Kishoritai’s music raised important questions in this context: Do human emotions have no place in classical music? Can a raga not elicit a direct emotional response in a listener? Can’t music that does this be a divine experience as well? Do swaras not have an identity, a mood, an expression of their own? Or is being bound in a swara-chitra – a tonal picture – their only fate?

Kishoritai’s music is her answer to these questions. It breaks the Jaipur Khayal’s tight bond between the melody-line and the rhythm-cycle. It thus forgoes Jaipur’s continuous, subtle pulsation, making it more relaxed and elastic, more malleable. Her khayal thus becomes fertile ground for the blossoming and unceasing exploration of emotion. She brings in free-flowing alaapchari – a feature conspicuous by its absence in her Gharana’s aesthetic. Kishoritai’s alaapchari is entirely her own creation and it becomes her vehicle for exploring the depths of her raga, and of herself. Her voice – tonally perfect, musically correct, naturally brilliant, sweet and agile  – is beautifully suited to this kind of work. Kishoritai’s khayal thus sheds its aloofness and becomes charged with emotion.

While the Jaipur seniors seem to be constructing grand raga-edifices, Kishoritai seems to be deconstructing the raga, uncovering it layer by layer, questing for its innards, for its ‘real’ feeling. She does not restrict herself to the trademark complex Jaipur ragas, but gives equal importance to the common, siddha-ragas such as Bhoop and Yaman in her repertoire – ragas that perhaps lend themselves well to her exploration. Her treatment of Bhoop in this manner is at once controversial and widely applauded. Her music is unplanned, unpredictable, surprising listeners with unexpected, unconventional phrases. Her taan is electrifying – imaginative, agile, complex and flawlessly executed. But what comes through most strongly in her performances is a dissolution of her personality in the music. As Kishoritai has herself often said, “dive deep into swara, and watch your ego wane”. It is this focus on swara, on the elusive mood of the raga that has sometimes led to accusations of her disregarding others, or of being temperamental. But it is this focus that gives rise to her unique music, and her music is exemplary of this love for swara.

Inspite of her various departures from it, Kishoritai is acknowledged as a rightful proponent of the Jaipur tradition. In her own words, “take away the Jaipur base from my music and see how it collapses”. Her taans are not archetypal Jaipur taans, but they are equally complex, rich and imaginative. She is often dismissive of word-play or of rhythm-work, but when she does indulge in these, they are reminiscent of her mother, who first introduced the bol-taan into the Jaipur framework. Her repertoire is full of authentic Jaipur compositions. She does not stick to the Jaipur discipline, but she has created her own discipline of music making, which she follows uncompromisingly.

Kishoritai is also widely loved for her vast repertoire of Bhajans in Hindi, Marathi and Kannada, all sung with equal passion and all reflective of her quest for representing human emotion and divinity in her music. With innumerable awards including the Padma Vibhushan and awards from the Sangeet Natak Akademi, many disciples who have become accomplished musicians in their own right, and legions of ardent admirers, Kishoritai leaves behind a rich legacy of both embracing tradition and questioning it at the same time.

Srijan Deshpande has, over the last decade, meddled in music in many ways, including Stage Performance, Teaching, Heritage Preservation, Research, Music Technology and Musical Instruments. He manages and curates the collections at Samvaad Foundation, Mumbai and Saptak Archives, Ahmedabad both of which are among the most important archives of Hindustani Music in the country. He currently divides his time between learning and performing Hindustani Vocal Music and teaching it at Ahmedabad University and at the Saptak School of music. View all posts by Srijan